How long does it take to knit a pair of socks?

Earlier this year a friend asked how long it takes me to knit a pair of socks? Obviously, it depends on several factors: the size of sock, the thickness of the yarn, how much free time I have, whether the sock is plain or is significantly more involved than vanilla, and let’s be honest, how much I’m enjoying the project! A pair of baby socks might take me a couple of evenings, likewise some adult socks in aran weight yarn, while a pair of vanilla socks will generally take me between two weeks and a month. Once in a while I’ll fall in love with a project, and will whizz through it, abandoning all other tasks to get them finished. That happened with my Three Sirens Socks and I knitted them in under four days, even though they are relatively large (UK size 9.5), and have patterning all down the front of the sock. Some socks linger for months or even years, usually if I’ve made an error and don’t feel like fixing them, or can’t quite remember what had gone wrong with them.

To try and get a more general answer to the question, I ran a poll in my Instagram stories to see how long it took other people to knit a pair of socks, and here’s what I found: 9% of respondents took 1 week or less; 36% took 1-2 weeks; another 35% took 2 weeks to a month; while the remaining 19% took longer than a month. From that, I learnt that most people take somewhere between a week and a month to knit a pair of socks. 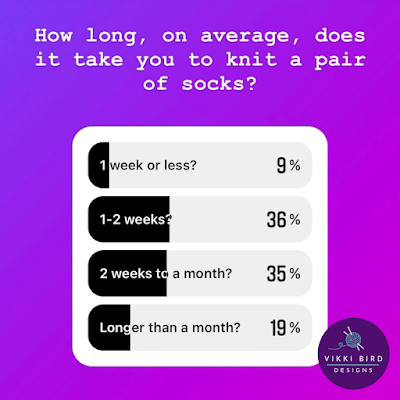 Does that answer the question though? Different people have different amounts of free time. Maybe the people who take less than a week to knit a sock are knitting for 4 hours a day, while those who take a month only knit for half an hour a day. So I asked myself, how many HOURS does it take to knit a pair of socks? The easiest way to answer the question was to time myself knitting a sock…

I cast on a standard-for-me sock: 64 sts, 2 mm needles (I knit loosely – I get 32 sts to 10 cm on 2 mm needles), UK size 9 (approximately 26.5 cm foot length) in West Yorkshire Spinners Signature 4 ply in the colourway Sherbet Fizz (I think this colourway is discontinued, current colourways can be found here*), and timed each knitting session as I created a top-down, heel-flap-and-gusset sock. 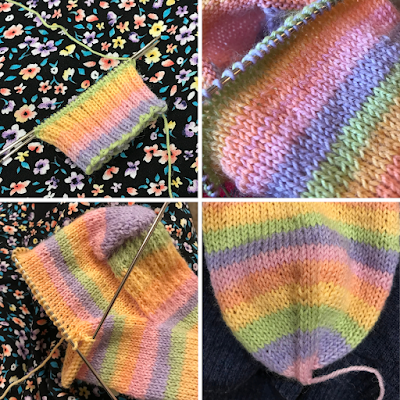 How long did it take me to knit the pair? I confess I only timed the first sock, but that took 7 hours and 33 minutes, not including any time needed to wind yarn or block the sock, but I did include weaving in the ends. Which gives a total of 15 hours and 6 minutes for a complete pair. I do knit quite fast, so it’s entirely possible that you might take longer to knit a pair, or maybe you’re super-speedy and take far less time. But it did show me that at a rate of an hour a day it wouldn’t take me more than about 2 weeks to knit a pair of vanilla socks, or a month at half an hour a day. I should definitely factor this in when planning gift knitting – I always leave it until the last minute and wonder why it’s a frantic hurry to finish the second sock.

Have you ever timed how long it takes to knit a pair of socks? Were you faster or slower? 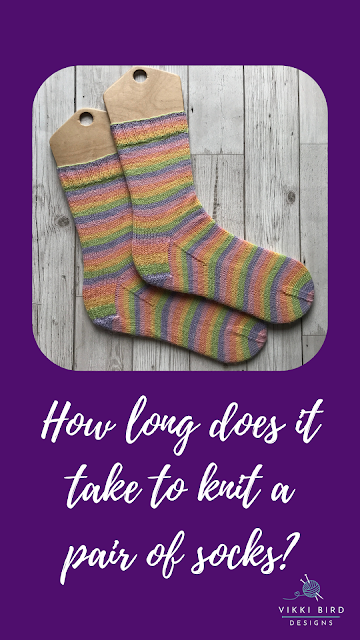